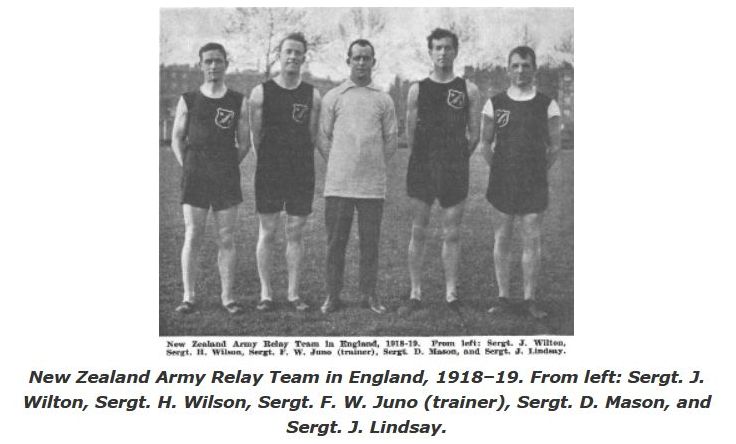 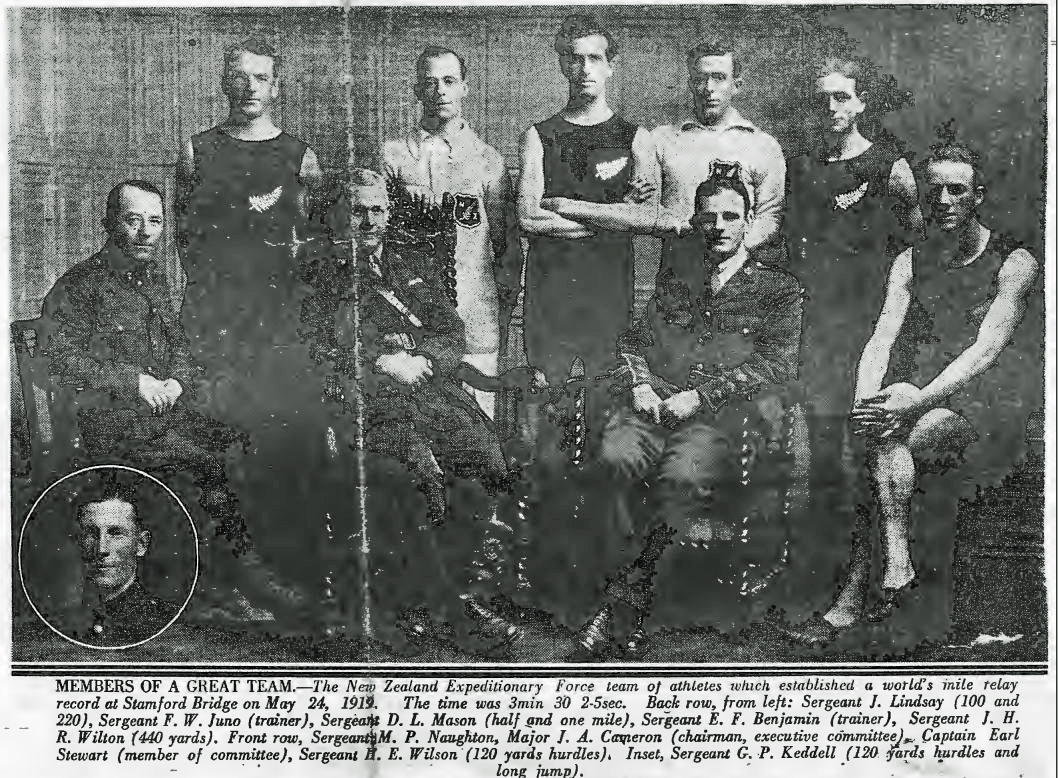 Mason gained the finest win of 1919 in the Inter-Allied Games at Stade Pershing, in Paris,
beginning on 22 June, where he beat Earl Eby, of the USA, in the 800 metres in 1:55 2/5. Eevn
the “New York Herald” reported candidly of Eby’s defeat that “the sturdy Colonial out-guessed
and out-run him”. Eby would take the silver medal in the following year’s Olympics, 1:53.7 to
Albert Hill’s 1:53.4. A photograph of Mason and Eby together after the race shows Mason
almost a head taller than Eby, who is listed in Olympic archives as being 1.79 metres in height.
If so, Mason must have been 6ft 3in (1.91m) or even more !
These Inter-Allied Games were of Olympic standard in some events, with the US winners
including future World record-breakers Charley Paddock in both sprints, Clinton Larsen in the
high jump and Robert LeGendre in the pentathlon. Paddock would win 100 metres Olympic
gold in 1920 and LeGendre would set a World record for the long jump during the pentathlon
in 1924. Dan Mason’s Inter-Allied team-mates, Jack Lindsay, Jimmy Wilton and Harry Wilson,
were bronze-medalists in the 200 metres, 400 metres and 110 metres hurdles respectively.
The 800 metres final took place on Thursday 3 July, which was an unfortunate clash of dates
with the AAA Championships held in a single session at Stamford Bridge two days later. In
theory, Mason could have got back to London in time, but he and a fellow-New Zealander,
Darcy Hadfield, who had won the single sculls rowing event, were personally presented with
gold watches as the outstanding competitors of the Inter-Allied Games by Marshal Pétain, who
had been commander-in-chief of the French forces in World War I and would be a contentious
President of France during the next war. Mason and Hadfield would presumably have been
required to stay in Paris for the closing ceremony on the Sunday.
As it happens, Hill was in the sort of superlative form for the AAA Championships which would
win him the Olympic 800 and 1500 metres the next year. In the course of the afternoon, from
3.05 p.m. to 6.05 p.m., he ran a heat and final of the 800 metres, winning the title by at least 20
yards in 1:55 1/5 from the World record-holder for 1000 metres, Anatole Bolin, of Sweden, and
won the mile in 4:21 1/5 by a similar margin from another Swede, Sven Lundgren, before
finishing off his labours by running the lead-off 880 yards for Polytechnic Harriers in the
medley relay, which they won just as easily by 25 yards. Mason’s fellow-New Zealanders were
excused duties earlier in Paris and took a 1st place (Wilson in the high hurdles), a 2nd and two
3rd places at these AAA Championships. The NZ Army rugby football team on tour in England
between January and May had also been in All-Blacks form, winning 33 of their 38 matches
and losing only two.
Mason and Hill met instead in the 880 yards handicap event at the Rangers FC Sports at Ibrox,
Glasgow, on 2 August, with the usual massive crowd of 40,000. The result was decisive. Hill
gave Mason eight yards start and won by two yards in 1:57 2/5. What a pity that Mason didn’t
take on Hill again in the handicap mile at the same meeting because Hill made up all but five
of the 145 yards he had conceded to a local runner and finished in a British record-equalling
time of 4:16 4/5. At the rival Celtic FC Sports in Glasgow a week later Mason performed a
similar feat in the handicap 880, running the first lap in 54 2/5 and finishing in 1:55 2/5. The
existing World record was 1:52.2, again by Ted Meredith, of the USA, in 1916.
Called up again by his military superiors, Mason won the British Army 880 yards at Aldershot
on 29 August, and Sergeants Lindsay (100 and 220 yards) and Wilson (120 hurdles) also put
the officers in their place. Then on 4 September at Stamford Bridge Mason won the InterServices’
880 by eight yards in 1:59 1/5. All in all, a remarkably successful season for the New
Zealander, but was he really “the greatest middle-distance runner in the British Empire”, as
W.F. Ingram would later boldly claim? I rather think not – but ranking No.2 to one of the very
finest ever of all exponents of those events is not a bad commendation, I think you’d agree.
Sergeant Dan Mason sailed for home on Christmas Day 1919 and never raced competitively
again, though he apparently applied for reinstatement as an amateur. The only one of that
trailblazing Kiwi quartet of 1919 to return to Europe for the 1920 Olympics was Harry Wilson, and
he was 4th in the 110 metres hurdles. Meeting up with Mason at his garage business in Point
Chevalier, Auckland, in 1940, W.F. Ingram remarked that the old mile champion looked “fit
enough to run the race of his life”. Had he been able to do just that 20 years before, who knows
what he might have achieved? Maybe, though, 4:10 is fanciful. After all, no one did faster than
that officially until 1931.
Daniel Mason’s competitive career was a meteoric one, but how curious that he has been almost
entirely overlooked by the sport’s historians. Even his own country’s prime expert, Peter
Heidenstrom, knew very little about him. Neither of two of the foremost international experts,
Cordner Nelson and Roberto Quercetani, in their immensely detailed book, “The Milers”,
published by “Track & Field News” in 1985; make any mention. I have to admit that I, too,
have been at fault because in my 2004 book, “3:59.4: The Quest for the Four-Minute Mile”, I
went out of my way to draw attention to the milers over the years who I thought merited greater
consideration than they had received, but I missed Mason entirely.
Perhaps the words above make amends.
.